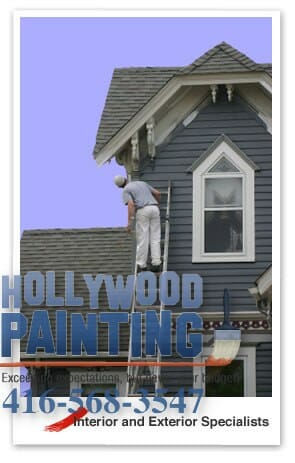 Mississauga handyman just uploaded a series of pictures up onto houzz.com this is a picture gallery website that displays many different pictures from different people.
In this particular series of pictures we were doing a quick and dirty paint job for customer for his daughter's wedding in the next few following days. He was planning to put in new windows next year but wasn't able to do the window replacements this year so he decided he would at least do some exterior painting on the front of his house here in Mississauga. These windows were probably somewhere around 5 to 8 years old and were only stained from the original builder. The staining is not a sealer and it allowed the water to penetrate through the wood making it dry out and rot.

The nice thing about staining wood is that most the time stain just fades away showing more and more of the bare wood and it is still easy to stand. Generally there are no flakes and paint peeling involved here it just looks bad and very weak.

The other problem with this situation was that all the caulking had dried out and cracked open. This allows all the rain to seep in behind the caulking soaking the wood from behind again ruining the integrity of the wood and window frame. That's why many times that the window sashes have to be replaced because it rot.