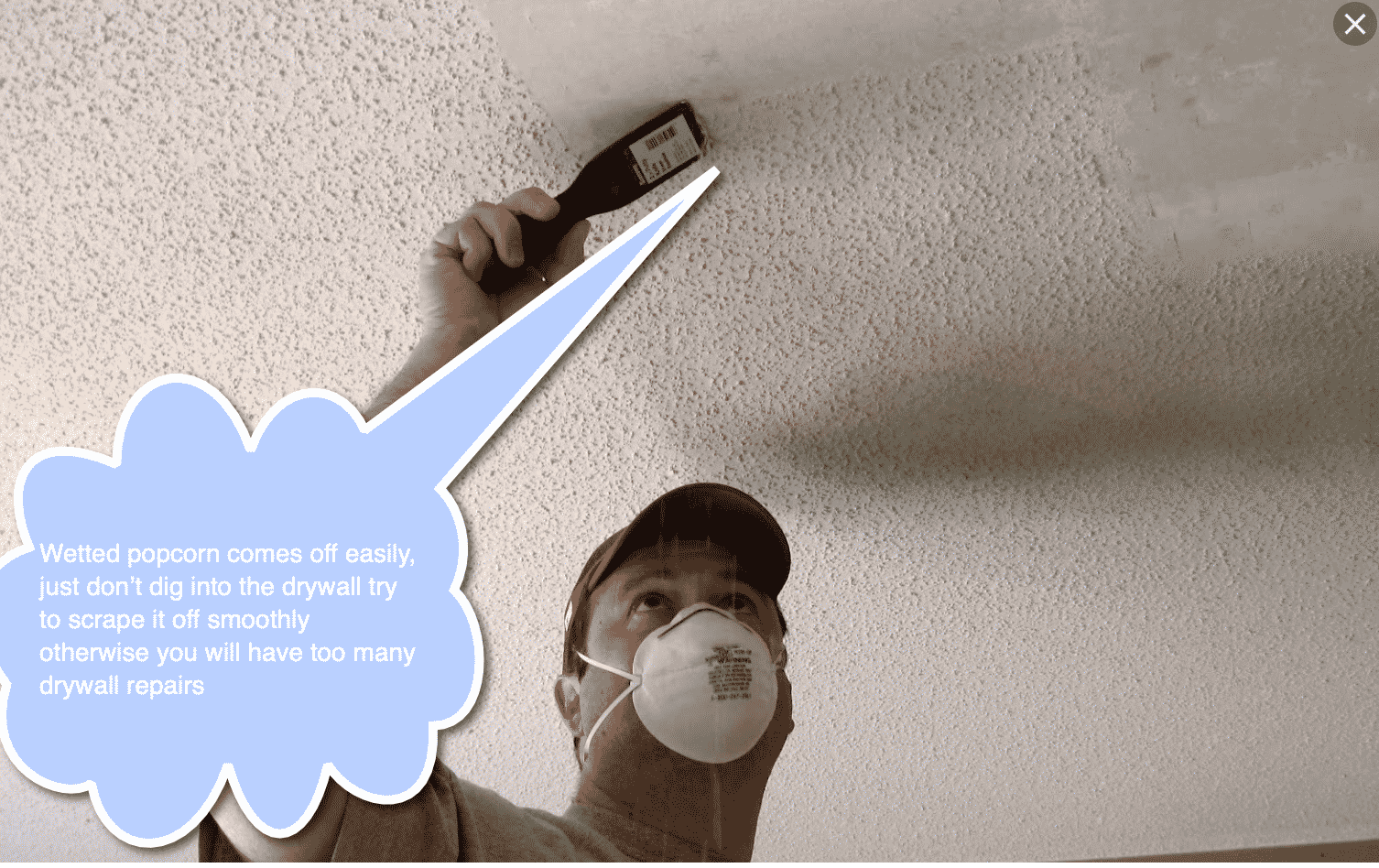 Okay, you have watched a number of videos on YouTube learning about how to remove popcorn off your ceiling. Popcorn ceiling removal as you probably know is becoming more and more in fashion getting rid of that old-fashioned look. This was a great idea for any number of years. It was a cost-saving for the builder and it looked kind of fancy in its earlier years since there’s nothing like it before. One of the biggest concerns about removing this acoustic texture is that it contained asbestos which is really not a very good thing to breathe and it can cause respiratory problems. This was discovered and rectified in the early 80s. Now they are using something different in the mixture that is not dangerous to the health. But that doesn’t mean that you won’t run into this issue on a stucco ceiling installed later. Someone could have had more of this material in stock.

The project of removing this material from the ceiling sounds and seems simple enough. Mississauga Handyman services have been doing this type of work actually for quite a few years now even before it became popular.

Basically there are 4 different phases of operation when undertaking to remove your texture ceiling. Read more

· This is a messy job in more ways than one no matter how you remove the popcorn from the ceiling you’ll end up with popcorn on the walls and the floor whether you took it off-dry or wet. So you must cover everything completely and carefully. Cover all the walls if you’re not going to paint them and cover all the floors and even make a plastic doorway for an entranceway. This will keep the room contained. This in itself is quite a job.

· As you know there are a few methods when it comes to removing popcorn ceilings. If you are lucky and the ceiling has never been painted before it will be much easier to do. Mississauga Handyman services most of the time incorporates a powerhead sanding machine combined with a high-powered dust extractor eliminating a large percentage of popcorn debris and dust. Almost a dust-free popcorn ceiling removal.

Another way to remove the stucco is too wet it and this is where it becomes a messy job. If one is not careful there will be blobs of dropped wet popcorn on the floor and eventually, somehow it’ll find its way on the walls too. You will have place this wet substance in a bag of some kind and it will be heavy due to the water content. An additional note is that when you are scraping the ceiling you must be extremely careful not to dig into the drywall otherwise will be lots of drywall repairs to be done. It would be much more practical to slow down and carefully scrape the ceiling not to damage it because the time it takes to plaster and sand that spot might be longer than it would be to slow down and scrape more carefully.

3-How do I fix the ceiling after I removed the popcorn?

· Now that the entire ceiling has been stripped of popcorn you will have to examine it for damages done by the removal and other irregularities such as bad plastering that was covered by the popcorn. In some cases, just an initial first coat plastering was done on the ceiling that was properly covered with the stucco hide it. And if that is the case the entire ceiling will have to be skim coated to make the ceiling flat and smooth. Then, of course, there is the need to sand the ceiling to remove any of the tool marks caused by your plaster knives or trowels.

4-What I need to know about painting the ceiling.

· The entire ceiling is now ready for paint. Painting the ceiling should be done with a primer coat first. This is to prevent the plaster from flashing through the paint job. Flashing means that a visual inconsistency will occur when painting over a previously painted surface with fresh plaster spots. These spots will show up as a dark spot through the paint job. And then finally the ceiling has to be painted with a quality Benjamin Moore ceiling paint. This ceiling paint is designed for the least amount of reflection making the surface, not reflective giving it a more soft look. Here again, the way the ceiling should be painted as evenly making sure that there are no roller marks or brush marks. Also, it is better to paint the ceiling before any pot lights will be installed otherwise there will be a lot of brushwork around pot lights.

As you can see from my explanation of popcorn ceiling removal it is not all that easy. Even for the seasoned painting contractor who specializes in this type of work has to be well-prepared and ready to do the work properly and efficiently.