Popcorn Ceilings and How to Repair Them 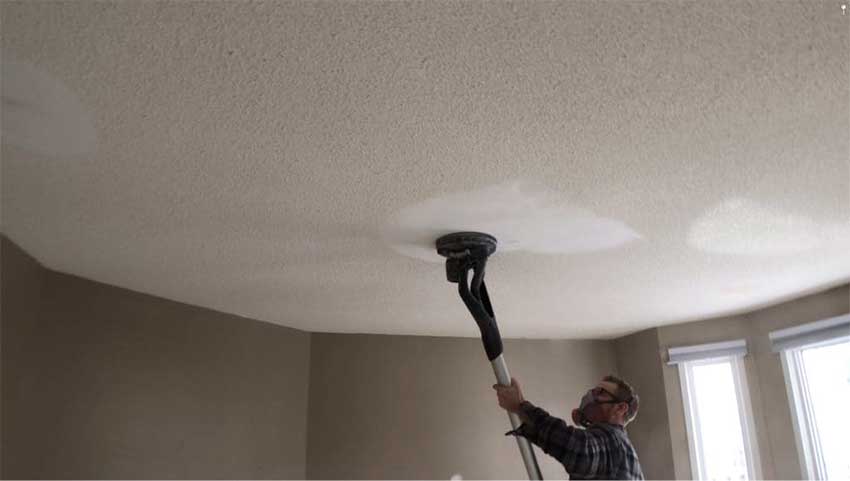 These are otherwise known as Stucco ceiling, stipple ceiling, textured ceiling or acoustic ceiling. It is a type of ceiling having a spray-on treatment on the surface.
The popcorn ceiling provides for a fabulous interior in bedrooms and living rooms. It brings a bright feel to the rooms and is able to hide its imperfections with its textured design. It can also be used in various rooms in the house or building coupled with coloring its surface with different shades.
This type of ceiling is often made of white asbestos fibres but this was later changed with styrofoam as the use of asbestos greatly affected the environment. Also, because of its components, textured ceiling repair steps should be carefully followed.
Damages to Ceilings
Numerous causes may contribute to the damage or deterioration of textured ceilings. This affects the difficulty of conducting ceiling repair. Regardless, it is important to find out what caused the damage in order to facilitate the repair properly.
Textured ceilings that have been installed in homes as early as the 1980s may flake or peel away. This needs an immediate fix, otherwise, it may continue to flake or peel away until the installation of new ones is already necessary.
One of the main causes is humidity and the formation of mildew. This is a problem mostly in kitchens and bathrooms. The mildew forms underneath the ceiling causing it to become damp. This loosens the adherence of the ceiling making it peel away.
Some other causes are water leaks and drywall dust. These causes usually happen due to poor planning in the construction of the house.
Water leaks often occur in two-story houses or buildings having two or more floors. When this happens, water leaking from the upper floor or story tends to run directly to the ceiling underneath it. In which case, quick ceiling repair is necessary to prevent further damage because the build-up of water under the ceiling may loosen its base and cause it to pull away.
On the other hand, drywall dust renders the adhesion of the ceiling to the base useless since the ceiling does not adhere to the base at all. It only adheres to a thin layer of dust that may come off as time passes.
In which case, it is important that the dust is wiped off first before the ceiling is attached. Unfortunately, this important step is often forgotten in the construction of houses.
How to Repair Textured Ceilings
Textured ceiling repair is easy to do once you have found the cause of the problem. Whether it be mildew or due to poor construction of the house, the problem can be remedied with a few simple steps and techniques.
Ceiling repair can be in the form of correcting the cause instead of fixing it. In this way, the whole process is made easier instead of having to go back to step one and fixing even parts of the ceiling that don’t need fixing.
Correcting is applicable to problems caused by leaks and humidity. A simple retexturing and patching of the ceiling is sufficient to preserve its appearance and adhesion.
In the case of drywall dust and extreme water leaks however, the entire textured ceiling has to be removed. This is because the entirety of the ceiling is already affected. The mere fixing of the area that is already peeling away may not address the problem. Flaking and peeling away caused by drywall dust and heavy water leaks call for a complete retexturing and renovation of the ceiling area of that particular room.
Patching Popcorn Ceilings
Popcorn ceilings are very advantageous especially in soundproofing a room or giving it a nice touch that is pleasant to the eye. That is the reason why it is greatly used in living rooms, bedrooms and even bathrooms.
The demand for the installation of these textured ceilings makes it sometimes expensive depending on the location. That is why it is better to patch up ceilings with minor problems.
Just like in correcting and fixing ceilings, finding out the root cause of the problem is important. This helps you know what exactly you should do to fix the ceiling.
It is important to keep in mind that in patching popcorn ceilings, matching the texture of the patch to the original would make it look like no patching was done at all. Fine-grade, medium-grade and coarse-grade aggregates can be used in this process.
The grades are a good place to start but after that, it becomes a matter of trial and error. It is best to try and match the texture on an old piece of wood and do the actual patching on the ceiling after you have found the perfect match.
It is also important to remember to build up the texture in order to match the correct one instead of putting a lot of aggregates and removing it later on. Moreover, properly drying the surface after every coat is a must in order to ensure the durability and good appearance of the patch.
When patching popcorn ceilings, remember not to spray on the texture because this provides less control in applying it. It also gives the appearance of a rushed patch or the difference in colors of the original and the patch would be far more obvious.
The last step in textured ceiling repair by patching is sanding. This process helps to blend the texture flawlessly and remove the old texture from the area being patched. This contributes to the blending of the patched texture to the original.
The process of repairing ceilings is not hard as long as you stick with the proper steps in doing so. Always remember that the first step is knowing the root of the problem in order to come up with the correct solution. Be sure to incorporate the right techniques in correcting, fixing or patching your ceiling and it will look as if no repair was done at all.